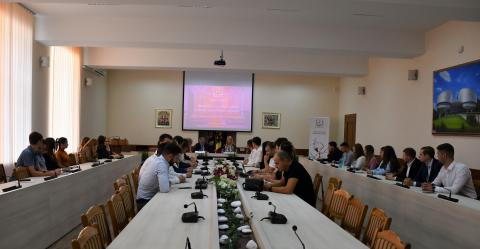 "European standards regarding the protection of national minorities" was the generic of the public lesson held by the judge of the European Court of Human Rights from the Republic of Azerbaijan, Lətif Huseynov. The event took place on Thursday, September 8, 2022, at the National Institute of Justice and were attended by NIJ trainees.

In the opening remarks, Ecaterina Popa, the ad interim Director thanked the guest for the willingness to share his experience and views on such a sensitive subject, being convinced that the perspectives presented will be useful to future judges and prosecutors.

During the public lesson, the European judge referred to subjects concerning the protection of national minorities, the ethnic, cultural, linguistic and religious identity of these groups, the international legislative framework in the matter, as well as the jurisprudence of the European High Court on the dimension of articles 3, 8, 9, 10, 11 and 14 of the European Convention.

Thus, were discussed the existence of the Gagauzia Autonomous Territorial Unit, the Roma communities and other ethnic groups that are on the territory of the country, as well as the challenges faced by the judicial system and the issue of the languages spoken in the Republic of Moldova.